So here I am, in Lund, Sweden. For those of you who don’t know what in god’s name I am doing here; I got accepted into the Erasmus program which allows me to study at a different university within Europe. I chose to come to Lund University firstly because I wanted to improve my Swedish and secondly because Lund University has the best program for exchange students. And indeed, I have been very busy these past few days.

Let’s start off with Arrival Day.  On the 19th of August this year all international students were supposed to arrive at Lund University. This year apparently was a record year because they welcomed over 1800 international students. Let me repeat: 1800! That is an incredible amount of people. And of course this made Arrival Day very hectic. Let me just paint the picture: carrying a backpack, dragging along a suitcase, a handbag, a duvet and pillow AND a welcome package, making your way through this mass of students. It ain’t easy, let me assure you. But nonetheless the atmosphere was great; everyone was really helpful, enthused and there were mentors (to be recognised by their blue t-shirts) everywhere! I got to my room at around 3 pm, which gave me a few hours to unpack, because later on that day there was an Arrival Meet Up. I didn’t really know what to expect, but it turned out to be a great night. I met some people from all over the world (Australia, Germany, Finland, Spain, Italy, the Netherlands, Canada,…) and I ended up going to a bar with a couple of them. Great fun! I got home quite late and I still had to make my bed, so you can probably imagine how satisfying it felt when my head eventually hit my pillow.  To process so many different impressions, faces, names, languages in one day is truly exhausting.

The next day there was a General Information Meeting. We got some general information about Lund as a city, briefings from the Police and Fire Department and some more information about studies at LU. Very useful. What made it even better was that I actually recognised some people I had met the day before! I am surely training my social skills here. Later on that day, I had a walk around the city by myself until it was time to meet up with my mentor group. When we applied for LU, we were asked if we wanted to join a mentor program. We were then put in a group of around 30 students and 6 mentors. The mentors are (almost always) Swedish students who volunteer to show us, exchange students, around and they also organise activities to get to know people in the group. Our first meeting was actually pretty fun; we played some games that they would normally play on Midsommar and we got to have fika after. After our group meeting, we went on to the official Welcome Reception, where the President of LU and the mayor gave their speeches. The room was absolutely packed with students. We sat all the way at the back but it was still great fun. The Welcome Reception really showed how traditional Lund University actually is. The reception started with a male voice choir who sang some traditional Swedish songs. Then there were the speeches and after that a marching band concluded the reception. I absolutely love LU’s philosophy: they believe in progress, innovation and in learning from each other. It is their aim to have at least 20-25% international students because they believe that such a culturally mixed university is the future. I ended up in the pub again, but this time I went home before bed time!

And then there’s today, where we met our faculty coordinators. They gave us some general information and we were given a presentation on plagiarism. They take this issue very seriously here and every year there are some international students who get caught plagiarising. It makes you aware to be extra careful when writing an essay/dissertation. My class mates from Ghent were there too, but I also spoke to some other Japanese students. One of them hadn’t managed to get her hands on a duvet and a pillow so she had been sleeping with a towel as a blanket and her clothes as a pillow. Can you imagine? Anyways, she saw some positive in this and even described it as an ‘adventure’.  That’s the spirit! We got some drinks and light refreshments after that. Seriously, the Swedes hand out candy EVERYWHERE at ANY TIME. But then again, they are the country of Daim and kanelbullar, so I don’t blame them. After that we went to get our student ID card, which took a long time because the queue was very long.

Well, that should bring you up to date! It’s strange to me that it’s only been 2 days, because it seems like I’ve been here for so long. Everything seems to move so fast and sometimes it feels like I don’t even have time to breathe or think. I’m hoping that after the introduction weeks are over, I can find some time to pause.

I’d love to rave about how beautiful Lund is as a city but I’ll get to that another time, when I have some more pictures to go along with that. This blog post is already way too long. 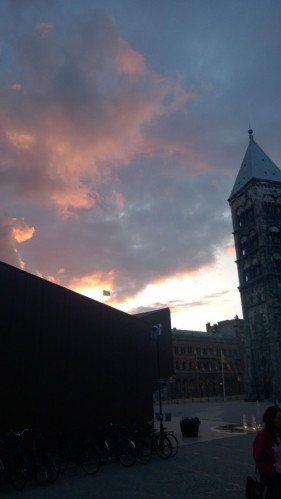 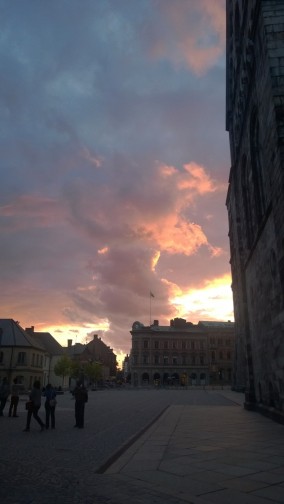 One thought on “Update”