Even though only a few days have passed since my last blog post, enough has been happening in order for me to write another one. So remember how I was hoping for some time to breathe? Well, that didn’t happen. Fatigue is building itself up, bags have started to form on top of already existing ones and my eyes are bloodshot. My brain is going a hundred miles an hour and yet I can’t stop smiling and enjoying meeting all these new people and discovering this wonderful country. Result: I look something like this.

Friday was a very busy day, because I had to go between different places a lot. I met up with Andrea, an exchange student from Barcelona, Spain, who is super lovely by the way, to go to the central AF (short for Akademiska Föreningen) building where the last tickets of the Welcome Party on Saturday would be sold. The ticket selling wasn’t supposed to start until 10 am, but because we wanted to make sure we got some of these much wanted tickets, we made our way to the building at 9 am. Some very disappointed faces could be spotted upon arrival as all tickets had already been sold. Apparently there had been some mix-up which meant that there were actually only 20 tickets left instead of the promised 200, which in turn meant that only people who got there at 8 am were able to get tickets. Bummer. To lighten the mood a group of us decided to go for breakfast (frukost). Kanelbullar truly heal all wounds. After this, there was a Student Associations Fair in the same building. I should probably explain why this is necessary.

—Intermezzo—-
In Lund, the student life is organised by an organisation called Studentlund. This organisation can be subdivided into 3 parts. Firstly there are the Akademiska Föreningen (or Academic Society) who control everything that is related to culture (music, student radio, theater,…). Secondly there is are the kår ( or Student Unions), who each represent your faculty. They make sure that everything about your education is up to speed. Last but not least there are the nations. Those are probably the most vibrant and biggest part of the student life in Lund. There are 12 nations, each carrying a name of one of the parts or cities of Sweden (Lunds, Malmö, Småland, Halland, Sydskånska,…). They are responsible for sport activities, night clubs, cafés, lunches and bars.
———————-

So, as a student in Lund you joint Studentlund and then pick a nation to join. Hence the fair to showcase all of them. Joining one however doesn’t mean you can’t go to activities organised by the other nations. I still haven’t made my mind up about which one to join, but I will probably have to pick one next week. I’ll let you all know which one I eventually decided to join!

After the fair, I had a meeting with my faculty coordinator, Fanni. Yes, Fanni, because in Sweden you call your teachers by their first name, not their last name. Everyone is equal and that also goes for the relationship between student and professor.  It’s going to take some time for me to get used to this. I expected the meeting to take at least half an hour, but I managed to get out of there in 10 minutes. I decided to just go for it and speak Swedish to my coordinator and successfully too, because all she kept saying was how duktig (good, clever) I was. I went home after this and got ready to meet with with my mentor group at the train station, because I was going to Malmöfestivalen. We took the train to Malmö (which means I finally got my card for public transport), had some dinner and then partied (or better: jumped up and down) to Rebecca & Fiona. Good times, despite the rain.

Yesterday I had registered myself for a hike to Söderåsen National Park. You could choose between a 3, 5 or 7 kilometer walk. Normally I would have picked the 5 kilometer one, but some people convinced me to do the longest one. Pushing limits and whatnot. The first part was the steepest and consequentially also the hardest. In my mind I had given up 3 times already on the way up, but I pushed on and eventually made it to the top, like all the others who didn’t seem to have any trouble at all. I guess that shows how unfit I am. But I am going to try and change that! The surroundings on the walk were gorgeous and the company was great. I did however manage to slip on one of the rocks and fall, but other than a few scratches and bruises, nothing to worry about. Yes, I am talking to you, Grandma, you especially. 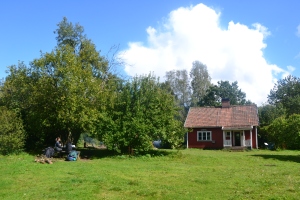 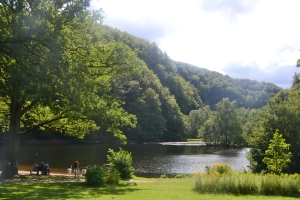 That same day was the day of the Welcome Party. Our mentor group had organised a pre-party in one of the student corridors here in Sparta (which, by the way, is where I live). Although normally I don’t drink, I decided to have a beer (which are 0,5 liter here) and I even ended up playing a drinking game (which I lost, big time).  It was pretty fun! After the pre-party we split up; some went to the Welcome Party and those of us who didn’t get a ticket (including me) went to the nations. It took forever to get there because a lot of people were quite drunk, but we made it to Östgöta Nation in the end. By the time we got in, I decided it was time to go home, so I quickly went inside and then left. Another successful date with my pillow and bed. 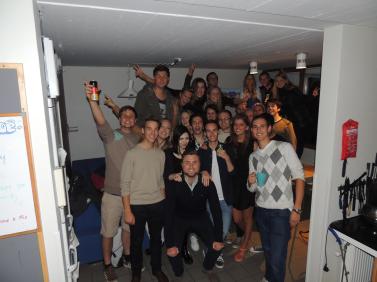 And this bring us onto today. I had registered for an IKEA shopping trip (in Malmö). I bought quite a lot of stuff, some of which was even necessary, so that should be applauded. My room is finally starting to feel like my own space, which is great. I met a girl from China on the IKEA trip and she pointed out how beautiful the skies are here in Sweden. I’d never really noticed, until she told me that in Beijing sometimes it’s even hard for her to even see the sky properly because of all the tall buildings. This made me realise that we are indeed very lucky to have such a beautiful, blue blue sky and that sometimes, the best things are easy to find. Great company, good food and blue skies. I’ll remember to look up more often from now on.