2. Friends are important. At any time, anywhere and at any age, friends are important. They are a major part of getting me through anything, but especially during exams, when they are the only thing that connects me to the outside world, they manage to lift me up whenever I am down. Whether it is posting pictures to each other’s walls on Facebook, ranging from dogs to daily hotties or snapchatting every five seconds. They don’t care about your greasy hair (see #1) or your naked face. That’s when you know a friendship is real.

3. Tea solves everything. The English are right about one thing: there’s nothing a good cuppa can’t fix. I used to drink neither coffee nor tea, but over the past year I’ve become a complete convert. I’m pretty sure my stay in Sweden and the Swedes love for fika has had something to do with that. Tea means warmth. It means comfort. Joy. Calmness. But also renewed energy. And if we’re being really honest: it means five more minutes I get to procrastinate. At least it’s helped me turn this excruciating time of year into blood, sweat and tea instead of tears.

4. Snail mail is great. I’ve always been a fan of sending letters and cards (see my Dear Somebody series) but I never thought it would be my daily portion of fresh air. I get excited when I see the mail man. Not because he is a hottie in uniform, but because it means that it’s time to GO OUTSIDE. I’ve claimed this task of getting the mail here in my family. There may or may not have been occasions where I almost bit someone’s head off because they had already gotten the mail. I know the getting of the mail itself is only a 2 minute job but to me it is a daily reminder to get a bit of fresh air, to go out, get out.

5. Never compare. This one applies to anything in life, really. Whilst studying there will always be friends or classmates asking questions, saying things, talking about things you have no clue of whatsoever. There will always be people that are way ahead of you and people that are way behind you. Never compare, everyone is different. Everyone has their own fortes, their own pace and their own way of doing things. Or as it was once stated much more beautifully: Comparison is the thief of all joy. And it really is.

6. Binge-watching is not necessarily a bad thing. To watch series is one of the only things that help me unwind during this turbulent time of year. After a long night of studying, after an exam that went right, after an exam that went terribly, right before an exam. To watch a tv series to me is like be transported into another world, which means I ultimately also forget all about my own world, even if it’s only for a while. It goes without saying that moderation is key, alternating between watching and studying but I also have to admit I’ve already finished watching all series I started watching before exams, including the whole O.C. series. Everybody needs a little bit of Seth Cohen in their lives form time to time.

7. Never do tomorrow what you can do today. This is probably the best tip for any exam or school related issue, but being a planner myself, I know it pays off to work and plan ahead. It makes sure exams are less stressful, plus it allows more time for #6. Seriously though, stop procrastinating by writing blog posts on how not to procrastinate and get on with it!

8. It will get better. No matter how bad things may seem at the moment, they always get better. Things like exams pass. Bad days pass. Better days are ahead (aka SUMMER HOLIDAYS).

9. Never underestimate the power of an early night’s sleep. Sometimes I sacrifice a bit of study time for sleep. Not only does it turn my bags on bags on bags on bags into mere bags on bags under my eyes, it also helps me focus and see things clearer. So this goes for anything. Sleep is a problem solver. Doesn’t any issue just look better in the morning? I think so. 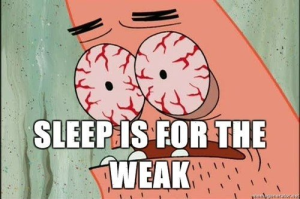 10. Unplug. Turn off your phone. I’ve had to plead guilty so many times of having been distracted by my phone or my computer. The only way to get rid of this annoying distraction is to shut it down. And it makes #2 all the more exciting, when after a few hours of undivided attention to your studying, you get to see all the crazy snapchats and pictures from your besties. So right, better stop reading this and get on with studying, hey?

PS: If you want to see what I’m up to during this time of exams, I post one picture every day on here.